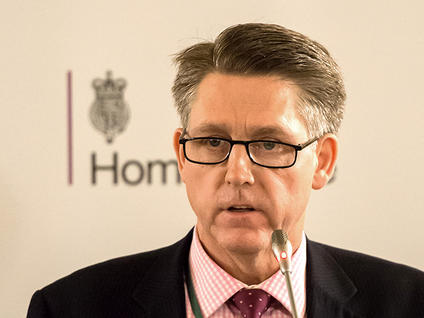 Kevin Hyland OBE has been elected as Ireland’s representative on the Council of Europe’s Group of Experts on Action Against Trafficking in Human Beings (GRETA) from next year.

Mr Hyland will succeed Professor Siobhán Mullally of UCC School of Law at the end of her second two-year term.

He was appointed as the UK’s first independent anti-slavery commissioner in November 2014 and received an OBE in 2015 for “services to combating human trafficking”.

Prior to this, he had a 30-year career as a police officer and was formerly head of the Metropolitan Police’s human trafficking unit.

Justice Minister Charlie Flanagan said: “The election of Kevin Hyland to GRETA is a significant achievement and a tribute to his broad international expertise and experience in the area of human trafficking at national and international level.

“I am confident that he will make a substantial contribution to the important work of GRETA. I wish to extend my congratulations to Mr Hyland and wish him every success in this vital role.”

Every congratulations to Kevin from all at MECPATHS!

An International perspective on Ireland’s response to Human Trafficki...