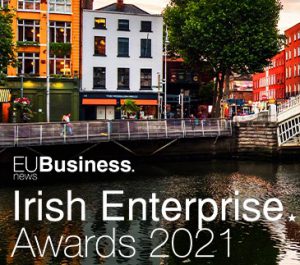 We are delighted to announce that following the nomination of MECPATHS for a European Enterprise Award in Autumn 2020, we received notification that MECPATHS has been successful in its category, Social Justice Enterprise of the Year 2021 (Human Trafficking).

The award notification comes at a time when Ireland becomes more active in its efforts to counter the exploitation of children with the ratification of The Lanzarote Convention secured and the introduction of The Criminal Justice (Exploitation of Children in the Commission of Offences) Bill which makes it a criminal offence for an adult to compel or coerce, or induce or invite, a child to engage in criminal activity.

The new measures were introduced in the wake of the Greentown findings, a four-year project by researchers in University of Limerick published in 2017. It concluded that criminal gangs were recruiting and exploiting children as young as 11 years by using drugs, alcohol and the notion of status.

MECPATHS remains appreciative of all those who make up our network of supporters and to those who commit to bringing about increased safety measures and protections for all children.

MECPATHS was delighted to be invited to collaborate with documentary producer Patricia Baker on a Human Trafficking in Ireland radio feature. Do Disturb has now been completed and its launch is timely, with the recent launch of The US State Departments Annual Trafficking in Persons Report.

The documentary, Do Disturb, features Sr. Mary Ryan, Ann Mara, JP O’ Sullivan, PREM Group HR Manager Sara Marr, Kevin Hyland O.B.E. and Hazel Larkin. It awakens conversations on Human Trafficking in Ireland and sets the national context within a global phenomenon. With thanks to Patricia for her skills, guidance, patience and professionalism.

To listen to the documentary and find more of Patricia’s work, please click here

The theme of the Webinar was ‘Human Trafficking amidst Covid-19’. Representatives from 26 countries joined in their hundreds as a panel of International speakers addressed the challenges faced in their home countries. MECPATHS was represented by Ann and JP and the theme of collaboration, which MECPATHS champions, was clear throughout the Webinar.

An opening address by Mary Crilly founder of Cork Against Human Trafficking (CAHT) outlined the reason for bringing people together on this occasion and was an encouraging beginning of proceedings. JP spoke about the work of MECPATHS, some of the challenges faced in Ireland in relation to The National Referral Mechanism and particularly the challenges faced in relation to Child Trafficking and responsiveness.

Kevin Hyland, former First Anti-Slavery Commissioner in The UK & currently Ireland’s representative to The Council of Europe’s GRETA (Group of Experts on Action against Trafficking in Human Beings), addressed key challenges facing the world today, how far-spread Human Trafficking & Modern Day Slavery are and his own vast experience of working to counter Human Rights’ abuses.

Lori Cohen, CEO of ECPAT USA, addressed their work in present times and the innovative ways in which they are now working to keep children safe. Lori outlined her organisations particular efforts in relation to online-safety and the range of materials now available from ECPAT to support parents/guardians in their efforts to protect children.

Garry Smith, CEO of The Medaille Trust, spoke about the work his organisation is currently undertaking as the largest supplier of Safe-Housing in The UK. An inside view of the reality of lockdown was presented and the vast efforts of The Medaille Trust to maintain a normality for those availing of their services amidst Covid-19.

Dr. Siobhan Mullally, Established Professor of Human Rights Law and Director of the Irish Centre for Human Rights at NUI Galway, address the issue of Human Trafficking from a European perspective with a very strong and clear outline of the impact of current legal structures on the safety of children and how laws impact on their lives as victims.

The risk of children around the world being abused and trafficked is growing as more countries, particularly poor ones, impose lockdown measures to limit the spread of the coronavirus.

Limits on movement mean children are more at risk of abuse at home and online, according to separate reports from United Nations and European agencies.

With kids suddenly spending a lot more time online, “sexual offenders are taking advantage of this situation and more children are likely to be groomed online and become victims of sexual extorsion,” the Council of Europe’s George Nikolaidis and Christel De Craim said in a statement.

As governments focus on curing those infected with coronavirus and maintaining law and order, much less attention is paid to the mental and physical well-being of kids. With the number of medical cases appearing to be peaking in places like Italy and Spain, psychologists and other child-care experts want more focus paid on vulnerable children.

Governments should ensure that 24-hour toll-free hotlines, texting services and mobile shelters are fully staffed to ensure kids can report abuse or flee an abusive home, U.N. rapporteur Maud de Boer-Buquicchio said in a report. The risks are even greater in psychiatric and social care institutions, orphanages, refugee camps, immigration detention centers and other closed facilities, where abuse is likely to go undetected, she said.

“As community ties are weakened due to the crisis, we must all remain alert and report any suspected child abuse,” said De Boer-Buquicchio. “We can make sure that children’s dignity and rights are protected and that no child bears the collateral consequences of this unprecedented pandemic.”

Child trafficking is defined as the “recruitment, transportation, transfer, harbouring or receipt” of a child for the purpose of exploitation. This definition comes from the United Nations Palermo Protocol. A child is defined by the Palermo Protocol and the United Nations Convention on the Rights of the Child as any person under the age of 18. Trafficking is regarded as a form of modern slavery.

The trafficking of children is a process comprised of two distinct stages: the Act and the Purpose. This is the “recruitment, transportation, transfer, harbouring or reception of persons, including the exchange or transfer of control over those persons … for the purpose of exploitation.”

The Means stage is not required for the definition of child trafficking. This is not to say that this stage does not occur for child victims, but the definition recognises that a child cannot give informed consent to his or her own exploitation, even if he or she agrees to travel or understands what has happened.

Download an overview of Trafficking in Children Defined in Irish Law here.

AN INTERNATIONAL SECURITY and human rights organisation has expressed concern that Ireland’s policies on human trafficking are allowing victims to fall through the cracks, including Irish children who are victims of trafficking.

Speaking to TheJournal.ie Valiant Richey, the OSCE’s special representative for combating trafficking in human beings, said one of the main pieces lacking in Ireland’s response to human trafficking is proactive identification.

“Lots of kids are in foster care or vulnerable situations, maybe abusive, and they easily get recruited into exploitative situations,” he said. “If you’re not looking for or screening for them it’s going to be hard to find them.”

Human trafficking is the trade of humans for the purpose of forced labour, sexual slavery, or commercial sexual exploitation for the trafficker or others

The OSCE is an organisation of 57 countries focused on security and human rights in particular.  Richey engages with governments to increase attention on the issue of human trafficking as well as policy development, research, data collection and training.

He said the organisation is particularly focused now on the decline across several countries in prosecutions for human trafficking offences.

Since 2015 there has been a 42% decline globally in prosecutions of human trafficking. In Europe, prosecutions have fallen by 52%.

“That’s tremendous, it’s not a blip, that’s really taking the foot off the gas,” Richey said.

Web hosting company Blacknight says it has agreed to disrupt certain types of web content, without waiting for court orders.

Blacknight has joined global industry leaders, such as GoDaddy, Nominet and Amazon, to agree a common framework to address abuse of the domain name system (DNS) by criminals.

The framework identifies four types of web content abuse that a domain name registry or registrar should act to disrupt – without waiting for a court order.

Hotel brands owned by Hilton, Intercontinental and Best Western are among a number of leading global chains accused of profiting from sex trafficking.

In a landmark case that lawyers claim demonstrates “industry-wide failures” to prevent sex trafficking, it has been alleged that women and children were held captive, abused and sold for sex in their guest rooms across the US.

A total of 13 women have accused a dozen hotel groups of wilfully ignoring warning signs that sexual exploitation was taking place on their premises.

MECPATHS provides awareness raising workshops, free of charge, for Hotels and Hospitality Groups who are committed to countering Child Trafficking in Ireland. To book your workshop, please contact info@mecpaths.ie

JP O’Sullivan from MECPATHS (Mercy Efforts for Child Protection Against Trafficking with the Hospitality Sector) shed light on how the organisation’s training led to the rescue of a child in a Cork hotel.

Established in 2013 by the Sisters of Mercy, MECPATHS offers training to help those in the hospitality industry pinpoint signs of child trafficking.

He referred to one recent incident by way of explanation. “We have volunteers visiting hotels all over the country, but this one just so happened to be in Cork,” he said.